Skip to content
No Comments on Uruguay; MoD negotiates surplus US Cyclone Class buyPosted in Latin America, News By adminPosted on June 27, 2022June 26, 2022
Contents on this page are provided with our best effort for accuracy. By visiting this page you acknowledge that, and agree to our disclaimer, if you do not – please leave this page now.

Uruguayan Defense Minister Javier Garcia and Uruguayan Navy Commander-in-Chief Admiral Jorge Wilson held a meeting with a delegation of senior U.S. Navy military officers, led by the commander of the naval forces of the Southern Command and the U.S. 4th Fleet, Rear Admiral James A. Aiken. The meeting, which took place on June 18, focused on issues of mutual interest to both countries including the possibility of transferring ships recently discharged from military service in the United States. 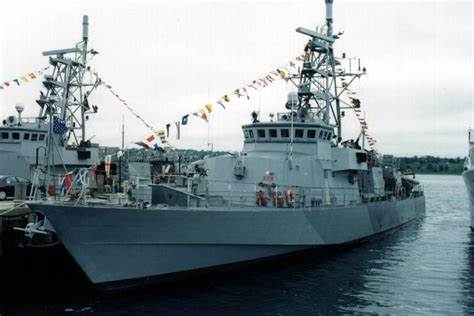 In this regard, the Uruguayan Navy expressed its interest in receiving Cyclone-class patrol vessels, of which some units are available for sale or transfer. Additionally, consultation was held on the possible fate of the Freedom-class littoral combat ships, which are being decommissioned with a few years of use and the United States has expressed its willingness to transfer them to friendly nations.

While the Cyclone class would be an ideal type of ship to replace the Kondor II minesweepers, which are at the end of their useful life and, even if this means the loss of the force’s countermining capabilities, modern patrol vessels with superior operational characteristics to those of the old Kondor II would be obtained.

On the other hand, the Freedom-class ships seem to be further from the possibilities of the Uruguayan Navy, which has a meager budget and a shortage of qualified personnel to carry out the maintenance of state-of-the-art ships. The only possible alternative would be that in addition to the transfer of material, the United States provided some system by which the maintenance of these ships would be carried out in that country.